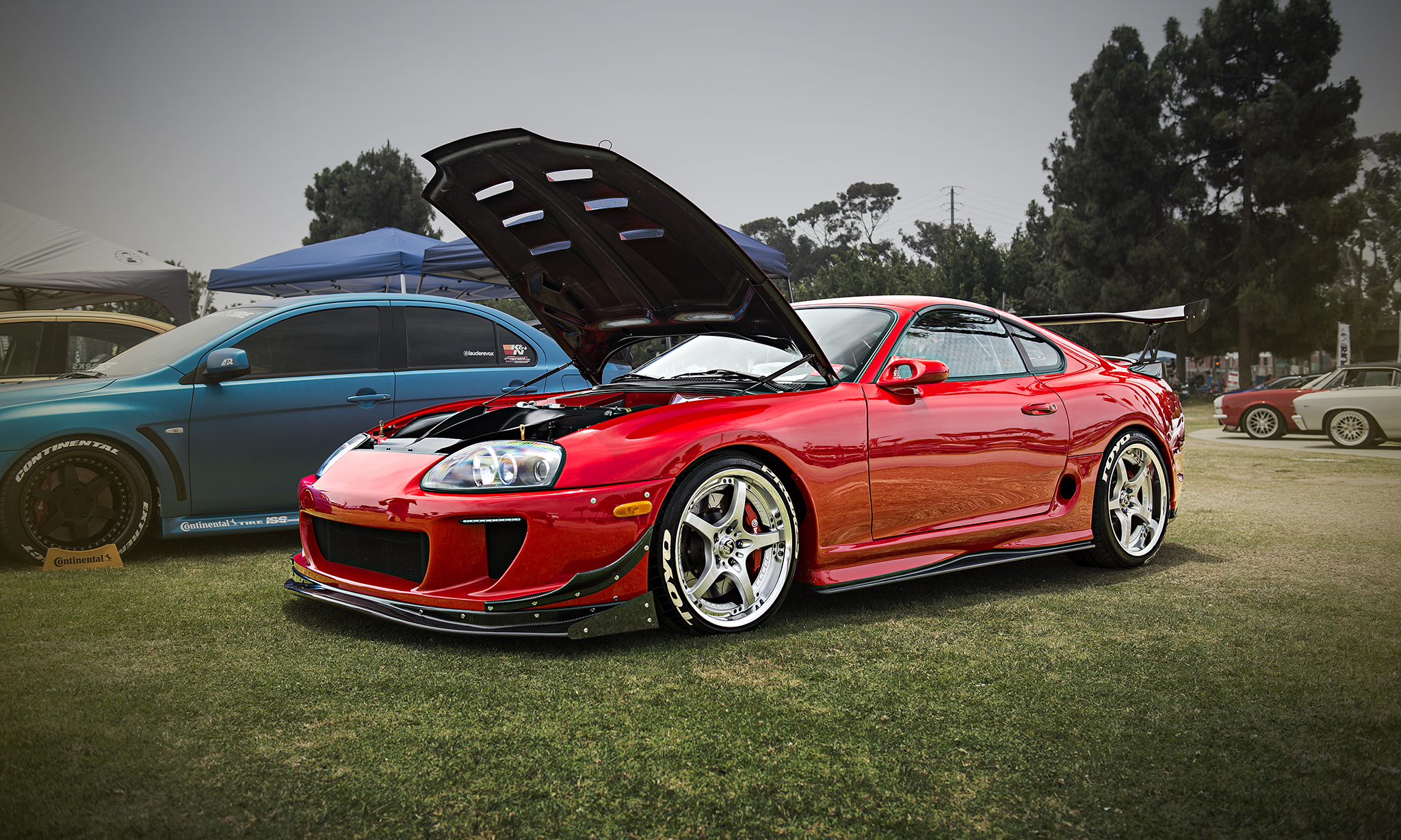 In the past there have been numerous traveling import car shows that have come and gone. Hot Import Nights brainwashed an entire generation, including myself, into modifying their car. They offered a space where modified cars could live and breathe, in the habitat made to show their alterations. With the HIN now defunct, a new show has climbed the ranks as the highly anticipated traveling car show — Wekfest. Their most recent stop at their home base in SoCal, specifically Long Beach.

Southern California has always been the hub of modified cars, so when the Wekfest show comes to town, the highly tuned examples come out to compete in numbers. Like this flared EP3 Civic with chromed Work Meister S1 wheels, and an interesting front aero setup.

Another EP3 with Mugen and Civic Type R exterior pieces, including the chromed Mugen MF10 wheels.

Inside laid a pair of Stätus buckets, Takata harnesses, and a full cage.

This Evo sporting a full Voltex aero kit with splitter and canards, matched its red livery with a set of Volk Racing TE37RT wheels.

Phaze2 Noel’s FR-S was out showcasing the white/polished SSR TF1 wheels, with the body shrouded in the wide Varis carbon fiber kit.

The Craft Square mirrors are the perfect carbon addition to the exterior of this Scion.

The Fiat Abarth is such an interesting car from the factory, but this teal wrapped 500 on Avante Garde wheels shows what can be done with this chassis.

The custom over fenders, and front/rear diffusers are a nice touch to separate this from the rest.

The Best of Show winner was this Liberty Walk wide body 997 Porsche Turbo at the Toyo Tires setup.

The contrast of colors was perfect on this female driven Varis widebodied STI, on black Advan GT wheels.

There is something so correct about the vintage looking Pit Crew Racing front end on a Miata. It could have easily been a production option.

The Spoon Sports tuning theme on a Honda is tried and true, and with so many different editions having surfaced over the years they still never disappoint. This RHD EF8 had the catalog unloaded onto it, and displayed the blue and yellow all over.

This Q45 exhibiting some “onicam” camber, due to these overly wide Work Emitz wheels.

This Hyundai Genesis has a one-off front end, and stuffs these wide Forgiato Artigli ECL wheels under its custom widened body.

The Tsukinousagi (or Moon Rabbit in Japanese) FR-S mixes two current meccas of Japanese aero together on one car. Blending the wide fenders of the Rocket Bunny kit, with the bumpers and side skirts of the Varis kit.

Notice the symbol he made on the wing representing both companies.

You’ll remember this female-owned E89 Z4 from our Bimmerfest coverage. Making the trip alongside the FR-S above from Vancouver, Canada to Long Beach.

Tom’s S2000 packs a punch, not only visually with his ASM bumper, and Circuit Garage over fenders or Work Equip wheels…

… but with his turbo F20C motor also!

This Liberty Walk GTR was so sleek in all black, and linked the kit with the Limited Edition LB Performance SSR MKIII Neo wheels.

The Lexus IS convertible hasn’t had as large an aftermarket impact as the other models in the lineup, but this female-owned Aimgain kitted sample shows they can be modified too.

One of the showstoppers at this year’s Wekfest event was this 1930’s Ford Model A, nicknamed #TheGreatDepression. The owner has a render laid out for the planned end result, including a few more vintage F1 aero tweaks.

Housing an F20C engine and interior bits from a Honda S2000, this car was certainly unique and clashed with the rest of the show entrants. The finished product can’t come soon enough.

An importer of JDM parts, M’s JDM Motors had their EF Civic in attendance on the highly coveted Mugen NR10R wheels.

Over the past few years this car underwent a full restoration, starting its new life with an acid dipped completely bare metal shell.

You can find this NSX in the most recent issue of Super Street. Its parts are all subtle, expensive, and ultra rare!

To the uninitiated it passes as a stock 90’s supercar, but to the enthusiast it captures your attention at every angle. And that subtlety is what makes it such a great build, worthy of its feature.

The DA Integra chassis is often the neglected stepchild of the classic Honda scene, but this Mugen-equipped Acura breaks that mold.

The Powerhouse Amuse GT1 wide body kit on this S2000 is so aggressive it almost sinks these wide concave Volk Racing TE37 wheels.

Rob from Crooks & Castles brought out a couple of his toys. Most of us can only dream of owning these. Including his Rauh Welt 964 Porsche, on bronze-chrome coated Floss Edition Work Meister M1 wheels with a 9” rear lip.

Love the tucked and shaved bay, and the V-mount rad/intercooler pushing air through these custom ducts. This car was so meticulously built, it was a favorite among guests.