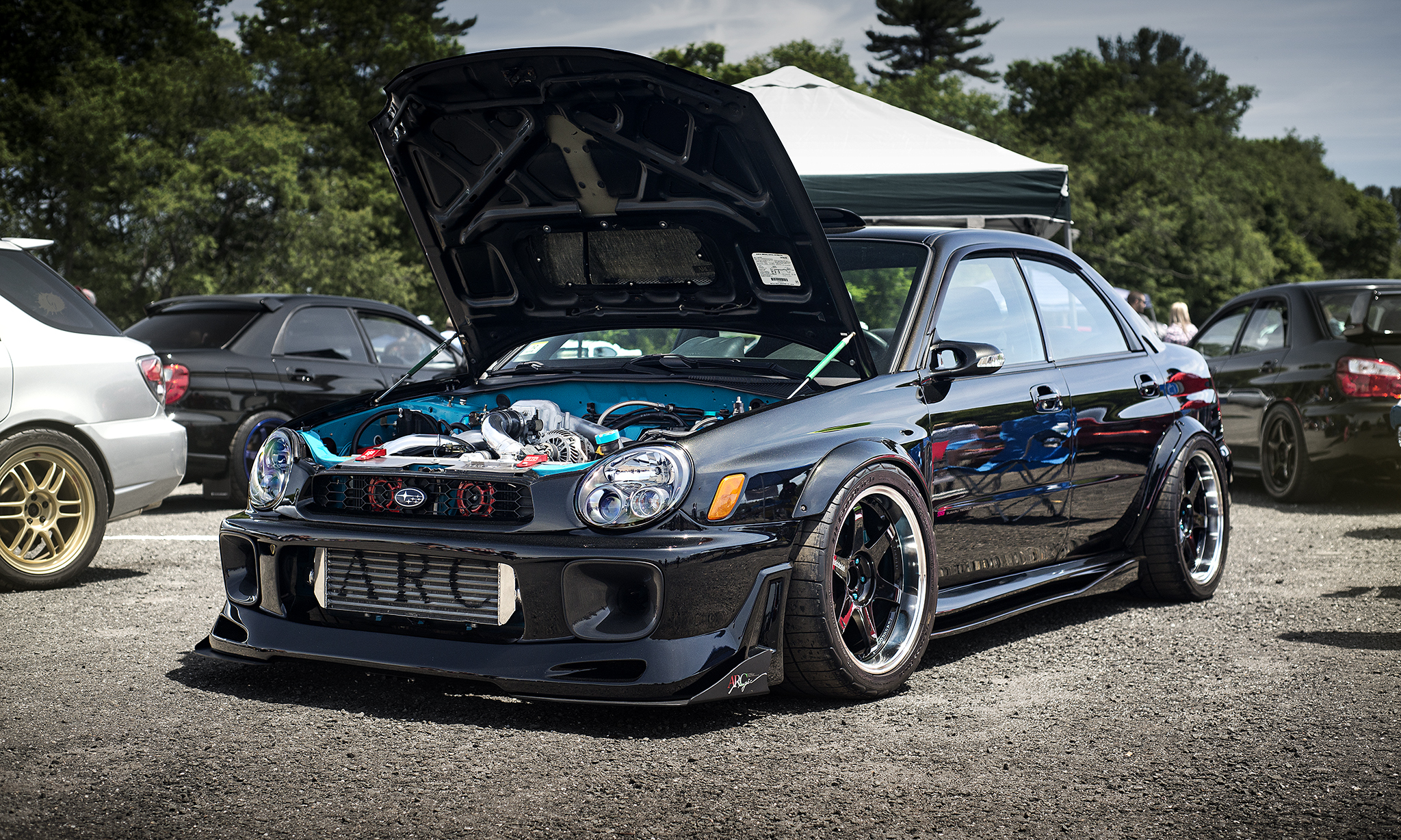 A few things come to mind when you think of Subaru; rally racing, AWD, and the rumble of a Boxer engine. While most Subaru owners modify their cars for daily road use, the aftermarket support is astounding, causing a large number of enthusiasts to heavily modify their cars. There is one event every year in New England that fuels this passion within the Subaru community… Wicked Big Meet.

This year, housing over 6300+ attendees and 60+ vendors, the “Largest Subaru Enthusiast Festival in America” celebrated its 10th anniversary. Subarus of all models and colors, and owners from all over the United States gathered at Stafford Motor Speedway.

This BRZ at the Premium Shield booth had just the right amount of carbon to offset the World Rally Blue paint.

The WedsSport SA-15R wheels are a nice choice for the aggressive look.

RavSpec in usual form brought their showroom of designer wheels and this bagged ’15 STI with the new Work M.C.O. Racing Type CS wheels.

They also brought this STI with another set of the WedsSport SA-15R wheels. This finish works so well with the legendary OEM color.

Prime Motoring had one of a few Skylines present at the show, their R33 on a large set of black Volk Racing TE37 wheels.

This STI had a custom fog light setup in the grill to mimic Subaru’s 24h Nurburgring racecar.

This grill was a one-off DIY job, so it was cool to see the owner’s ingenuity to produce this alone. I can see this grill setup becoming popular in the future.

JNA Performance brought out a few special builds but this GC chassis drew quite the crowd.

In order to fit the wide Advan GT wheels, this Impreza needed bolt-on flares mounted on a bolt-on widened quarter panel. That’s a lot of wide!

iAG Performance had their unique TR-42 kit car out front of their booth setup.

This car gets its power from an iAG Stage 2 plus 2.5L mated to a WRX 5-speed trans.

This STI hatch at the EFI Logics booth had a nice mix of carbon pieces and motor work, but the Spectrum Silver SSR TF1 wheels really caught my eye.

Subimods had a few cars present at the show including this STI with Volk Racing TE37 wheels over a large StopTech BBK.

Subaru brought a couple special treats of their own for everyone to see. This BRZ and STI actually debuted a new color option that day at Wicked Big Meet. Named Hyper Blue, they encouraged people to share photos of the cars on social media using the #SubaruHyperBlue hashtag for a chance to win a prize. Not a bad way to unveil a brand new color!

Subaru Tecnica International also displayed their 2015 STI race car, all the way from their class winning finish at the Nurburgring 24h race in Germany.

The Shop CT’s STI sedan at the Cobb booth was sporting some M&H Racemaster drag radials, and a parachute mounted behind the trunk.

The event combines a vendor area, car show, and autocross event. Giving entrants a chance to show off their car, and their driving skills.

Overland designs had this STI hatchback at their booth with some wide Desmond Regamaster Evo wheels.

StopTech had a full display of brake products in their booth, and also this 10-series FR-S.

The Gram Light 57C6 wheels give some added clearance mounted over the 4-pot Trophy Kit BBK.

When you go to an event of this magnitude, time needs to be reserved throughout the day to check out the parking lot.

When you take into account the massive attendance of this show. The chance of stumbling onto something great is pretty high, like this simple white hatchback on Enkei RPF1’s.

Or this vintage Subaru 1600, parked fittingly in the only patch of uncut grass in the entire lot.

There’s something so interesting about seeing lifted Subaru cars built to handle off road conditions.

Perhaps this Altima owner should have lifted their car before attempting to drive up the large hill overlooking the parking lot. They had to be pulled to freedom after getting the car stuck on a rock.

A group of Skylines were parked in the outside parking lot. All in matching white paint, this was a nice break from the plethora of Subarus at the event.

Another rare imported Japanese car in this lot was this little Honda City.

If the forward facing turbo doesn’t give it away, the Lexan glass, stripped body, and carbon roof tell you this car is capable of some serious speed!

This pair of white Foresters stood out in the parking lot, each sporting different JDM SG5 STI pieces.

The dried mud and fog light bar hint at the kind of activities this BRZ normally partakes in.

At the opposite end of the spectrum lies this STI sedan, clad in the Vollkommen Design widebody kit squeezing the Forgestar Super Deep Concave F14 wheels beneath the fenders.

With the entire interior wrapped in red Bride fabric, it’s easy to see why this took home the “Best STI 08-11” award.

The same weekend as Wicked Big Meet, the Subaru Rally team was busy clinching another victory in the Rally America series, some 5.5 hrs away at the Susquehannock Trail stage. Immediately following their victory, the team loaded up the car and brought it over to the meet in Connecticut, for a surprise entrance halfway throughout the day.

I really enjoyed this Audi wagon with a full B5 RS4 Avant exterior conversion.

The Enkei Racing RS05RR wheels complete the aggressive looks of the body.

Bren Tuning brought out this project GC, built by OneNine Motorworks and Ring Leader Racing which has a Toyota 2JZ stuffed inside the engine bay. I’m sure it will be a blast once it’s finished.

Ending the day, the vendor giveaway drew quite the crowd of hopefuls. All patiently waiting for their ticket number to get called as the raffle items were announced.