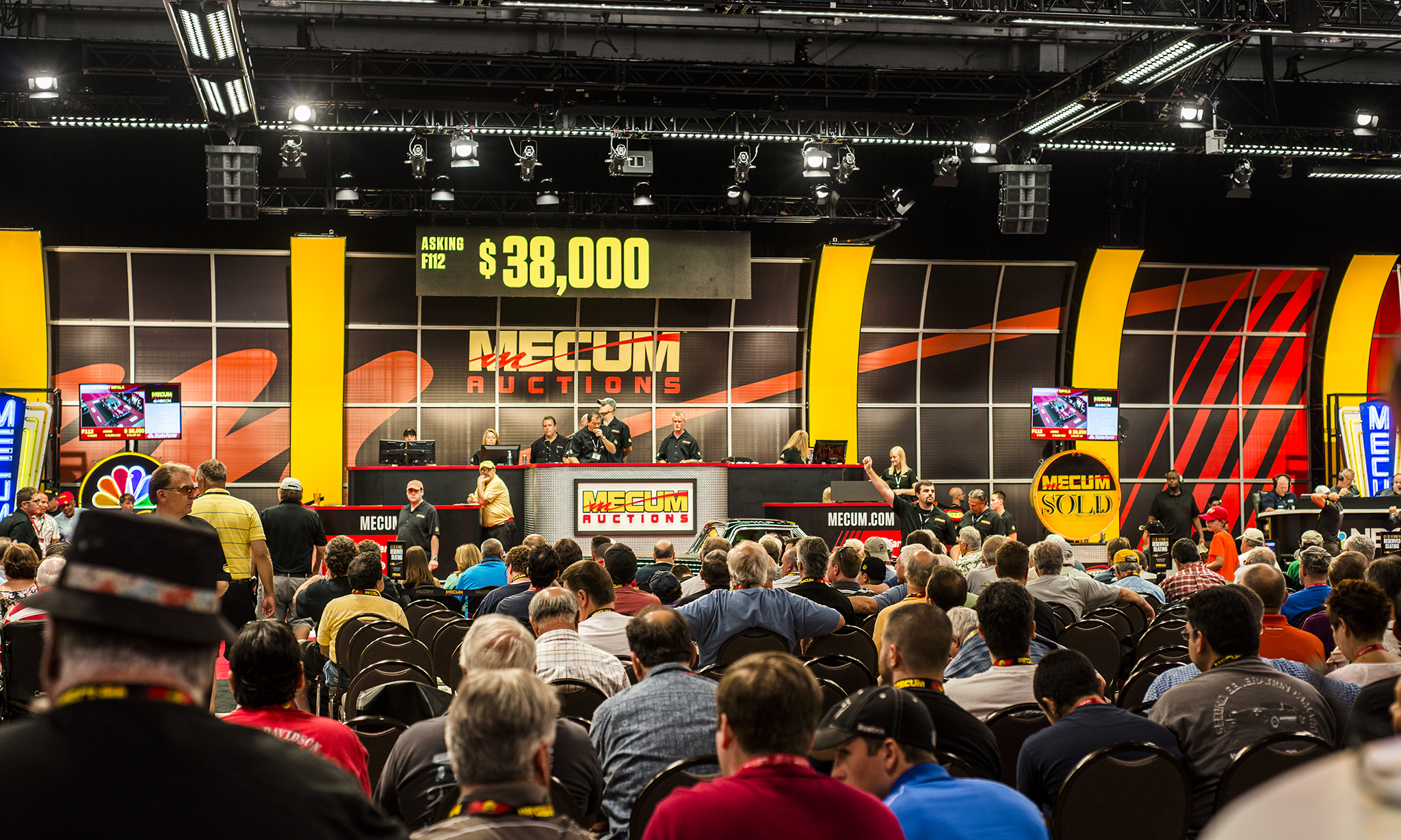 In the world of collector cars there are countless choices of which auction company to sell or buy a car through. Choosing the ideal auction event can be the difference between a guaranteed sale and taking your automobile back home with you. Of these larger auction companies, Mecum Auto Auctions is one of the prominent few to be televised live.

Before entering the Harrisburg Farm Show Complex in Harrisburg, PA, it was evident that a planning and preparation was needed to run this massive event. The drivers, responsible for delivering the cars onto the auction block, were a small fraction of the Mecum employees franticly circling the grounds.

As shown by this Bel Air, the owners meticulously cleaned the cars as they approached the auction block.

With only minutes to spare, it rolled up to the stage area with a fresh coat of wax.

Mixed among the cars for sale over the weekend, collections of antique neon signs were also offered for sale.

The impressive display had power running to each of the immaculate functioning vintage signs.

NBC has the exclusive television rights to broadcast the auction live, and could be seen interviewing owners throughout the event.

This 1955 Chevrolet Bel Air convertible was being filmed as one of the interesting cars present.

The level of detail exhibited in the custom interior clearly deserved being documented. It included a host of modern upgrades; a digital gauge display and plush grey leather upholstery.

This custom Ford Model A grabbed the attention of every passerby with it’s exposed engine and wooden roof beams.

There was an abundance of Corvettes inside the auction hall but only one fuel injected ‘63 split window on the premises.

This car is rare because its rear windshield was split into two sections, and was only offered in limited numbers in 1963.

This Porsche 930 Turbo with Fikse wheels looked out of place, as one of the newer cars in a sea of vintage muscle cars.

A walk down the long winding tunnel of the complex granted access into several different rooms of car storage. Hidden in these back rooms were treasures like this pristine 1975 Toyota FJ Land Cruiser.

The unique leather used to refinish the seats fit the rugged feel of the whole truck.

This restored Bronco showed how much the chassis evolved over time, as the latest incarnation of this SUV in the 90’s was much larger.

Similar to a scene from “Gone in 60 Seconds”, the spare rooms were filled with potential high dollar muscle cars.

A spotless 1971 Austin Mini Cooper S was tucked back behind several other rows of cars. This genuine Cooper “S” was sold earlier in the auction and awaited the new owner’s delivery.

This interesting 1969 Chevrolet G10 Van showed how diverse all of the vehicles were.

Also offering a day dedicated to vintage tractors, this auction had it all. Notice the Flathead V8 power plant in this Ford tractor.

In the main Auction hall, the chaos of cars crossing the auction block continued.

The notorious stage seen on countless live recordings of Mecum Auctions was impressive to see in person.

Along with the neon signs, the vintage tractors, and collector cars this auction also housed a large assortment of classic motorcycles.

The examples waiting to be auctioned included this 1968 BMW R50/2 with a boxer-engine and a 1926 Indian Chief.

The enormous tent outside housed the variety of cars before they entered the auction hall. One of the most unique cars in the lineup was this 2008 Chevrolet Monte Carlo NASCAR.

Rounding out our coverage is this 1974 Plymouth Barracuda (‘Cuda) complete with racing slick tires and a 440ci engine.