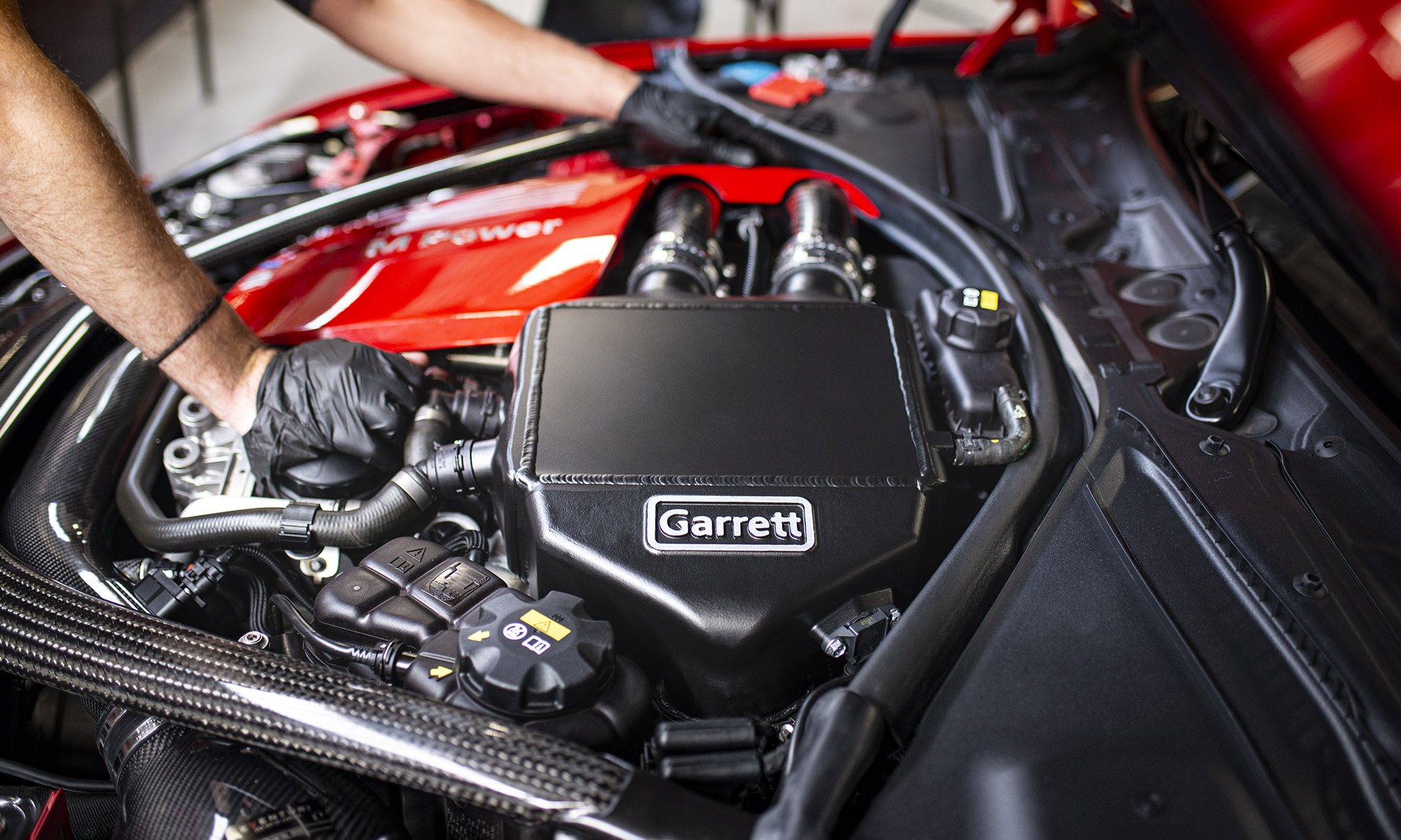 The BMW M3/M4 equipped with the illustrious twin-turbocharged 3.0-liter inline-six S55 engine is a formidable competitor in any enthusiastic driving scenario. In Competition package-spec, it packs upwards of 450 horsepower right out of the packaging. The car comes standard with an advanced suspension system to piercingly control any curve and does so with creature comforts and amenities galore. The M3/M4 is a brilliant machine; however, that’s not to say it doesn’t have its shortcomings like anything else. As few and far between as these issues may be, the addition of well-engineered aftermarket upgrades will cure what ails any sports sedan (or coupe).

Today’s discussion lies in the vulnerable charge air/intercooler section of the S55 powerplant. You see, because these engines push such incredible numbers out of the box, there is a fair amount of stress on a lot of the OE equipment. BMW certainly overengineers and builds each vehicle with this in mind. Still, as pieces age in different atmospheres, some begin to wear and even fail. Such is the case for the OE liquid-to-air intercooler that rests atop the aggressive inline-six. Rather than walk you through the relatively straightforward 1.5-hour installation, I want to go over some of the critical reasons this item should be replaced. Though, for the record, these parts all include hardware and fit directly into OE locations without any modification needed, which is always a massive plus.

The S55’s factory intercooler piece has created a name for itself with dramatic failures. This includes internal cracks in the core, which essentially inject coolant directly through the intake and into the cylinders causing multitudes of issues. Not only could the rogue coolant mix in with the engine’s oil at this point, causing excess wear on any rotational objects and a massive decrease in performance. It also has the potential to hydrolock the engine, causing a catastrophic failure. Either way, this is not an “if it ain’t broke, don’t fix it” kind of situation. An upgrade to the factory heat exchanger is necessary. The sooner, the better because these items have failed with as little as 15,000 miles.

Now, with any aspect of the automotive aftermarket, it is never enough to simply replace a malfunctioned piece. We, as enthusiasts, must refine. We must increase power and our enjoyment of the vehicle whenever adjustments happen. With this in mind, it would certainly be nice to gain a few horsepower from the heat exchanger and charge pipe upgrade. That’s precisely what we’re going to discuss today. We’ll showcase the installation of the Garrett Powermax™ direct-fit performance air-to-liquid intercooler and an Eventuri carbon fiber charge pipe set.

We took a trip to our friends over at R/T Tuning in Montgomeryville, PA, to document these items’ installation. If the car looks familiar, that’s because it’s our Director of Marketing’s 2018 F80 BMW M3, factory-finished in sumptuous Ferrarirot paint through the brand’s BMW Individual program. You might remember this sleek car from our coverage of KW Suspensions’ DDC system or various MPACT event coverage images. Regardless, this particular car contains a slew of tasteful upgrades in almost every area, including an Eventuri carbon fiber intake system already occupying the engine bay.

Besides replacing the factory core and negating the failure risk, there are a few different reasons why the Garrett Powermax™ is an excellent upgrade for the M3/M4. One of them is the additional 47-percent larger core with dual-pass coolant flow, which reduces intake manifold outlet temperatures at heat soak by an average of 10 degrees Fahrenheit! This drop makes a vast difference compared to the stock unit’s output and is physically noticeable by touch.

In addition to the increased core size, flow, and reduction of intake temps, this air-to-liquid intercooler can generate an 18.7 horsepower increase with 6.4 lb-ft of extra torque. It can change the feel of the car while also ridding it of failure-prone equipment — it’s a solid piece.

Thanks to the cast aluminum end tanks, which were optimized in CFD to improve flow distribution, and the bar-and-plate core construction inside, the Powermax™ is capable of handling up to 980 horsepower. These factors further qualifying it as a proper upgrade for the power-hungry S55.

“Garrett PowerMax™ products are engineered to increase performance and maintain OEM fitment. We analyzed the turbocharged vehicle market for applications that can benefit from higher-performing products to improve the driving experience. The 2015+ BMW M3/M4 is one of those popular vehicles with its twin-turbocharged 3.0-liter engine. It’s a great handling platform with many performance mods on the market, and this air-to-liquid intercooler helps make the ultimate driving machine just a little better,” said Tim Coltey, the Global Performance Marketing Leader at Garrett.

Even after the intercooler is replaced, other intake deficiencies cause concern on the F80/82/83 chassis, including the OE plastic charge pipes. As with any plastic pieces operating in an engine bay’s constantly-changing atmosphere, especially those subject to varying boost levels, failure is imminent. In stock trim, the BMW-equipped pipes have proven to be prone to failure, boost leaks, and severe power hindrances. This threat only increases as boost levels surpass factory marks. The standard solution is to replace the plastic charge pipes with a better-suited metal variant, which won’t crack as easily as boost demands increase. However, therein lies another issue involving engine cover clearance and overall fitment inside the cramped bay.

The solution? Enter Eventuri, a UK-based world-renowned carbon fiber and intake specialist operated by aeronautic and tuning engineers. So you know it designs new offerings with the utmost quality and performance in mind. The company produces a wildly popular intake system for this vehicle segment — the same kit installed on this car. However, it’s the carbon charge pipe set on which we’ll be focusing.

To combat the charge pipe failure we discussed before, Eventuri constructed its solution using a cross-directional carbon fiber weave layup with multiple layers. The team built each pipe to a 2mm wall thickness for incredible strength. This process alone is enough to rank it above the OE units. However, Eventuri took it a step further by embedding CNC-machined stainless steel rings into the charge pipes’ openings. This feature aids in handling the additional clamping forces associated with higher boost applications.

Strength is all well and good, but a metal substitute achieves that for a fraction of the price, so why choose the composite pieces? Well, clearance for one and flow quality for another. These pieces were explicitly engineered to take the most advantage of the intercooler’s output and limited space available in the F8X engine bay. Because the synthetic material is not restricted to round tube formation, innovative product design increases internal tube volume wherever possible. This breakthrough makes the turbochargers less restricted and freer-flowing, increasing the potential for power gains. While a metal option could boast these same improvements, it would be to the detriment of clearance. The carbon fiber pipes from Eventuri do so without any OEM fitment interference — whether its the factory engine cover or any associated hoses or tubes. It’s a relieving significance when you witness how simple the install is, which involves removing the factory pieces and installing the carbon choice.

In all, the updates we covered in this article are straightforward installations. They can be performed using simple hand tools to loosen hose clamps, undo hardware, and cinch coolant hoses. The simplistic install of these items combined with the potential failure risks with the BMW components should raise this to the top of everyone’s list for improvements on their F8X BMW M3/M4. We hope this article helped explain why.