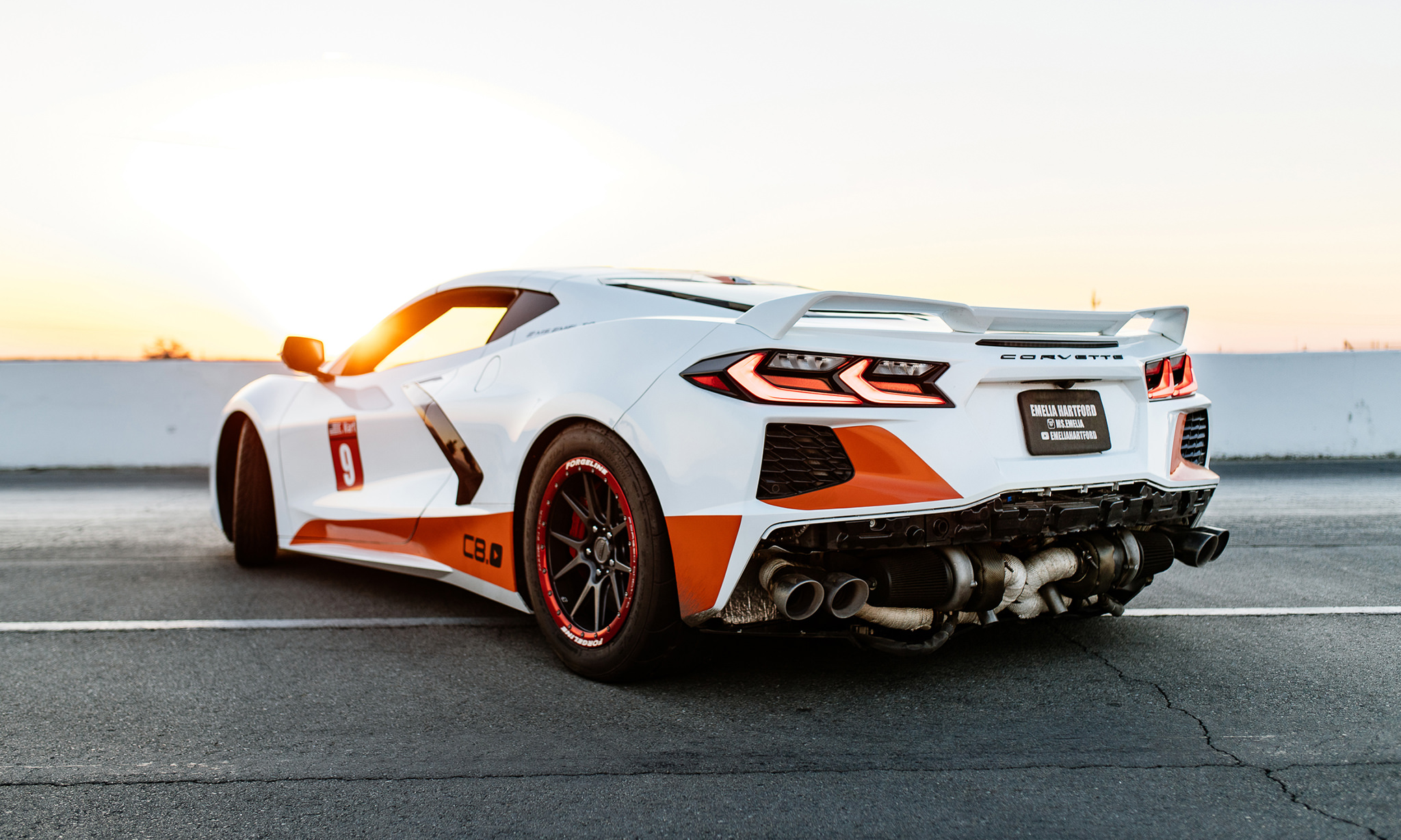 If you were alive when it aired, think back to the old Gatorade commercial from ’97 where Mia Hamm and Michael Jordan go toe-to-toe in a myriad of different physical activities while the song “Anything You Can Do (I Can Do Better)” resonates overtop. It may just be an ordinary commercial for a sugary beverage. However, it marked a pivotal moment in what is still an ongoing progression — women in sports. Unfortunately, female inclusion, publicity, and equal wages in professional sports are still a constant battle, even though women have proven themselves time and time again. No matter the progress made over the years, there are not enough women in motorsports. Fighting that battle and winning is the subject of today’s feature, Emelia Hartford. She recently piloted her twin-turbocharged, 1,022hp C8 Corvette to a new quarter-mile record at Famoso Raceway in McFarland, CA!

For any of you who are unfamiliar, Emelia hosts her own YouTube channel, where she takes fans on her journey through the automotive world.
“I was working dead-end job after dead-end job, with my busted LS-swapped 240SX rotting in my parking space. I ended up meeting a few large automotive YouTubers, and they gave me the nudge I needed to pick up a camera. My first task was getting my 240SX back up and running right again,” says Emelia.
Since then, she has amassed over 683,000 subscribers and countless followers on her various social media channels. She’s done more than just create a network that generates views. She has transformed the media space and built her own dedicated E Crew family in the process.

WHY THE C8 CORVETTE

While contemplating what car’s avenue to develop on her channel, GM announced the C8 Corvette, and everything fell into place. She liked the mid-engine layout, the chassis design, and the price point. Her strong knowledge of the small-block Chevy engine didn’t hurt, either. Once the car was hers, there weren’t initial plans to modify it — if you can believe that.
“On my drive home from Kentucky, I stopped in Texas to go drag racing. Which led to me putting a bottle of nitrous on the car with Peitz Performance. Which then led to getting hooked on trying to work around the uncrackable ECU. So obviously, the next step was twin-turbos. And truthfully, I like putting turbos on everything,” laughed Emelia, “and I wanted to see what this LT2 was capable of.”

LEADING UP TO THE RECORD ATTEMPT

After figuratively setting the dyno ablaze (and actually igniting several shop rags and a slice of pizza in the process), Emelia’s C8 achieved new ground eclipsing the highest horsepower record for a C8 Corvette with an astounding 1,022 horsepower (942 lb-ft of torque) dyno pull. From there, she had her sights on another record — the fastest C8 Corvette in the quarter-mile.
“The previous record we were trying to beat was a 9.95 held by ETS. My original goal (when I went down the rabbit hole) was just to get the car into the 9s. Once I realized the record was attainable, I had to go after it! And also, hats off to ETS and everyone who’s making these cars fast. It’s a whole different challenge modifying a car that we are all still locked out of — which makes it that much more fun and interesting,” says Emelia.

THE DAY OF THE RECORD

“We were keeping an eye on the weather at Famoso Raceway for a week prior. We even rescheduled for a couple days later to make sure the DA [density altitude] was optimal for the record pass. We couldn’t have been more blessed for a perfect day!”
She arrived at the track with some remnants of pump gas still in the tank but not low enough to switch to race gas. She ticked off mid-to-low 10-second passes on a street tune while she and her team broke-in the Mickey Thompson ET Street S/S tires on her drag pack Forgeline Wheels.
From there, the team moved onto a race gas tune utilizing methanol to get the most out of the setup. With run after run, Emelia put the Corvette through its paces, including some transmission issues that they would have to work around later in the day.
After breaking into the 9s (an achievement on its own), there was no turning back for her and the team, and they initially broke the record with a 9.90 early in the day. Once that record was achieved, they set out to plummet the timeslips deeper into the 9s.
As temperatures cooled and her team helped the Corvette cooperate, Emelia piloted the C8 to a blazingly fast 9.41 at 144 MPH! In the process, she cemented a new world record for a C8 Corvette and her place in motorsports history.

She drifts, she drag races, she likes bean and cheese burritos, and she breaks C8 Corvette records, so what’s next?
“Honestly, after having the opportunity to support development on a new platform, I’m hooked and am looking for the next prospect. I love all forms of motorsports. My ultimate goal is acting, but I do want to spend more time road racing. So the short answer is everything,” she says.
In all, I’m excited to see her inclusion in motorsport and the proof that anything men can do, women can do better. It’s such a big step for motorsports in general and paves the way for a more equal younger generation. As far as the Corvette is concerned, we’ll all have to stay tuned to her channel to find out what’s next for that.
Also, massive props go out to Caitlin Ting, who photographed the feature and record pass for us — making her own large strides as both a Twitch partner and highly talented female automotive photographer in a majority male realm.